Been wanting to talk about this for aaaaaaaages. But by god does designing medium scale 3D printed objects take a long time. Anyhow, I've been designing this thing since maybe August and been printing since late October.

Here's a couple of pictures of it open. 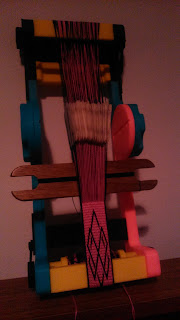 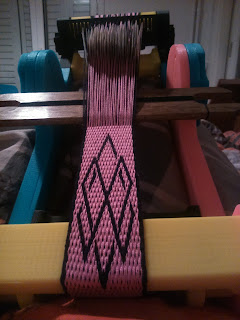 I'm just freehanding that pattern. I kind of fluffed up the last two switchovers. And it was meant to be a knotwork but it clearly isn't. I really need to learn to draft things out before weaving them, I'm not good enough at sketching. Same thing on paper actually, I can draw stuff in front of me (to an extent) but I can't sketch from my head.

Anyhow, here's a couple of pictures of the thing closed up. Boom! 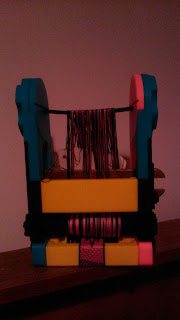 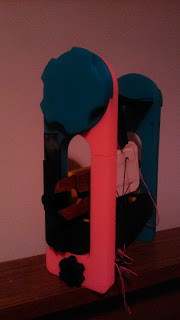 So, that's nice. I'm quite happy with the progress so far. Now, onto the issues.

The big circles that form the hinge get in the way of my hands when i'm weaving and I'm always bumping my knuckles off them. Would probably work better for rigid heddle weaving than tablet weaving, which it is theoretically capable of, but I don't have the technology to make an adequate rigid heddle at this time. Need to speak to a man about a dog when it comes to that one.

The advantage of the big circular hinge is that it's strong as heck and also that it means the whole thing folds in one motion into a nice clean shape. I'm working away in my head for the time being on finding a way of getting the functionality and strength of the big central hinge without the kuckle-skinning downsides.

The other big issue (that I predicted this time, I was hoping i wouldn't have the knuckle issues) is that one or both beams need to be partially unwound for the folding motion to occur, as the back beam (which the warp floats over at the back of the loom) must fold into the inside of the front beam (that the cloth floats over at the front.), this is quite far from ideal and will require more uncomfortable brain-thinking work over the course of the coming months.

And the final big issue is the size of the beams in terms of their capacity for the storage of both warm and cloth. They're just too wee for my liking. I can just about get three meters maybe onto the warp beam but I'll not get that much onto the cloth beam. Also narrower beams are more difficult to beam well. I am using a bracket and raddle system in order to make warping as simple as possible but it still require improvements. I need to find a way of making more space for beams of larger circumference. And also find a better way of attaching the warp to the beam. Because at the moment I have to tie them on with a stick in the traditional manner and that really isn't an elegant solution of a loom of this size. In fact it's downright cumbersome and further cuts down on the warp storage capacity.

I shall have to take a few leafs out of the book of Industrial Design when it comes to designing my warp beams. Make them 4 metres long, 2 feet wide and milled out of solid Aluminium. Only joking. I'll make them out of plastic, but I'm totally stealing some ideas from industrial looms. Those looms know what they're doing.

Oh, and the whole thing fits in my satchel btw. Which I accidentally left at work, so I can't show you that.

Popular posts from this blog

October 30, 2010
I am currently in the process of designing a triple layered fabric. One layer shall carry conductive warp threads (one out of every three), another layer shall carry conductive weft threads (again, one out of every three) and a third layer shall lay between them and act as an insulator, keeping them apart and preventing unwanted contact between the two conductive layers. Constructing a treble cloth is a compicated process. The way that a treble cloth is woven is that first the face cloth is woven, then the centre cloth is woven, then the back cloth is woven. This is a draft for a treble cloth. The crosses indicate weaving marks for the cloth currently being woven, the dashes are lifts and are used to indicate shafts that are being lifted in the case of layers that are above the layer currently being woven. Blue is back, Red is front, Green is centre (All three layers are plain weave btw) The cloth is constructed like so 1: Back cloth is woven. All red and green marks are lif
2 comments
Read more

June 10, 2013
This is the first in a series of video and photo tutorials showing basic to advanced tablet-weaving concepts. These lessons shall each build on the last and hopefully take the viewer from simple diamond patterns up to more complicated double face pattern weaving with finer yarns and eventually onto the heady heights of brocading and other fancy techniques (just as soon as I learn how to do them myself). In this first lesson we'll learn the basic weaving steps involved in weaving a diamond pattern in the backstrap style. This lesson is meant for someone who has purchased a ready-made warp from me. The next lesson shall detail how to design and make this warp oneself. And we begin This is the basic pattern we are making. The woven band is tied to my waist with another strap. I am holding a small stick shuttle in my right hand which contains the weft. In front of me are the cards, each card has 4 warp threads going through it. The gap that you can see is called the
4 comments
Read more